Friends of Forêt-la-Blanche – Our History

During the 1970s, the Quebec government, recognizing the fact that the population of the province became increasingly urban, undertook an awareness program for the Quebec forests. The Quebec Ministry of Natural Resources is responsible for this process, and decides to establish a series of “forest education centers” (CEF) across the province. Each CEF’s mission is to promote the understanding, appreciation and education of forest conservation in every region of Quebec.

In Outaouais, the Ministry chose the territory of Forêt-la-Blanche to establish the Forest Education Centre for the Outaouais region (CEFO) in 1979. The crucial reason for the establishment of the CEFO near the Lac la Blanche is that the area has undergone very little human or natural disturbances over time. It includes ancient forests, endangered or vulnerable species and more than thirty lakes and ponds. From the ten forest education centers established across the province, only the CEFO territory contains such forest populations.

The CEF network attracted a steady clientele during the 1980s, but a significant drop in visitor levels was observed in the early 1990s. In 1993, the Quebec government announces the closure of the CEF network. The ministry attempted to involve community organizations to maintain the original vocation of the centers, but in many cases, trails are closed, buildings demolished and the lands are sold. In the Outaouais, a non-profit organization ‘Vie Active Nature’, tries unsuccessfully to keep the vocation for CEFO between 1993 and 1995.

From 1995 to 1998, the CEFO is abandoned and the Ministry of Natural Resources attempted to find a use for these lands. Some propose the establishment of an “experimentation and demonstration forest” for researchers looking to innovate in management and certified forestry practices. This plan would be financed by a series of recreation and tourism activities on the territory, including hiking, all-terrain vehicles and snowmobiles trails, and the sale of lots for cottages near some lakes, including Lac la Blanche.

It was in 1998, that a group of concerned citizens came together to form the organization “Friends of CEFO” (now Friends of Forêt-la-Blanche). The organization’s primary mission is to safeguard the ecological integrity of the territory forming the CEFO. Friends join forces with several provincial and national groups, including the Nature Quebec and Canadian Parks and Wilderness Society to campaign to protect the territory of the CEFO against the proposed projects. At the same time, the Friends reopen the interpretation centre and undertook and ambitious project to restore all the interpretive trails which were abandoned for a few years. In 1999, the first school group to visit the site since its closure.

In 2000, the Friends discussed their vision of establishing a protected area covering the CEFO territory with representatives of the Environment Ministry of Quebec. The Friends felt that the status of “ecological reserve” for the whole territory would be the best option to preserve the rich biodiversity of the area. This level of protection was the only one available (at the time) in Quebec that would prevent industrial activities, motorized recreation or cottage development. While public access is not typically allowed in ecological reserves, an exception was made at Forêt-la-Blanche to allow the Friends to continue to maintain the trails and to offer educational programming for schools and the public.

On the 23rd of September 2003, following the publication of a decree in the ‘Gazette officielle du Québec’, the entire territory of the former CEFO becomes the “Forêt-la-Blanche Ecological Reserve.” It was the 69th Ecological Reserve in Quebec, the largest in the south of the province and one of the only publicly accessible.

Friends then sign a Memorandum of Understanding with the Ministry of the Environment (now the Ministry of Sustainable Development, Environment and Parks or MDDEP) on the management of the educational program on the territory of the ecological reserve and the body became manager of on-site activities (development of educational programs, trail maintenance, promoting, financing, etc. …).

Although the organization achieved its objectives for the establishment of an educational program and for the maintenance of the trails, the fact remains that funding remains precarious and the maintenance of an aging interpretation centre represented a significant financial burden.

In 2006, discussions with the MDDEP and the municipality of Mayo began. With a view to involve the municipality more actively in the management of the pavilion in return for the use of a portion of the building for community purposes (Municipal library, meeting rooms, etc..). The Friends also wanted to renovate the interpretation centre. In 2008, the MDDEP agreed to renovate the interpretation centre. In doing so, a room is reserved for a future community library and functional rooms are made available to the community for workshops and meetings. 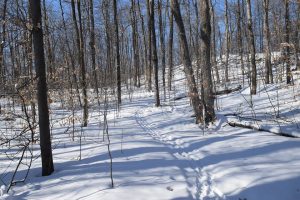